'Dust hung in the air': local resident looks at Dirty '30s and pandemic experiences side by side

Gwen Boivin remembers having to stay inside during the Dirty Thirities in Saskatchewan, and she compared some of those hardships to the experience of the pandemic isolation happening now
Apr 28, 2020 2:00 PM By: Larissa Kurz 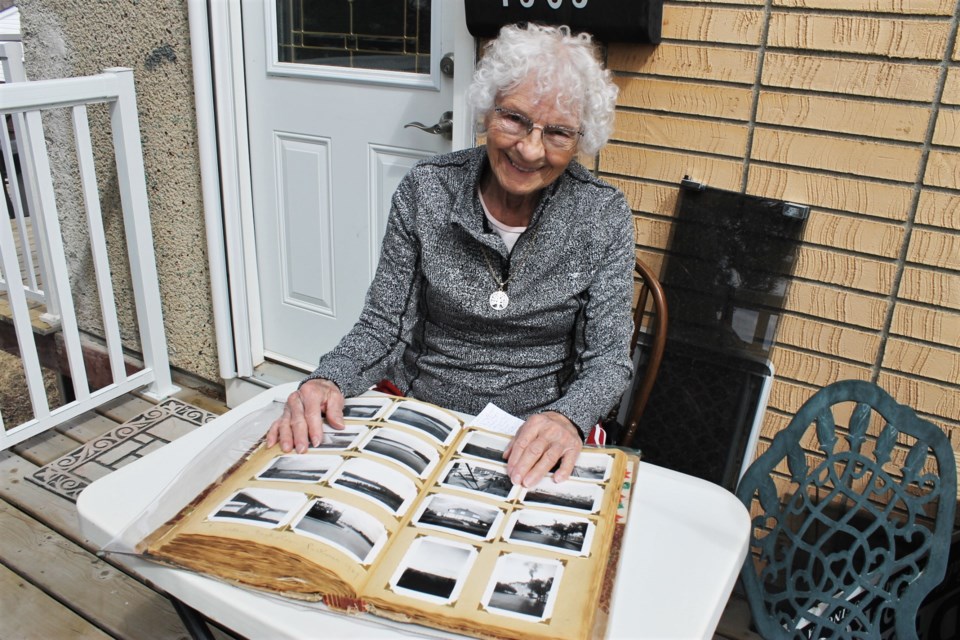 Moose Jaw resident Gwen Boivin, 85, flipped through the photo album her mother made that’s filled with family memories from growing up in the Dirty 30s, World War II, and beyond.

Moose Jaw resident Gwen Boivin remembers growing up during the Great Depression and the Second World War, and she couldn’t help but notice that a lot of the things people are dealing with during this pandemic really resonate with her childhood experience here in rural Saskatchewan.

Born in 1934, Boivin grew up just outside of Moose Jaw, with six other siblings. She was just a young girl during the time of economic rationing in the Dirty Thirties, which more or less bled right into wartime rationing during the Second World War.

For her, the social changes that residents of Saskatchewan are adapting to currently feel somewhat familiar, while at the same time they feel strangely different.

“This is all bringing me back to when I was a kid, and it wasn't that easy (then),” said Boivin. “And it's different now, really different, but there's a lot of things connecting in a different way, too.”

Boivin couldn’t help but compare her experience growing up with the experience she’s having during this pandemic — which she joked is just another world event to add to the list of things she’s lived through.

“This is a walk in the park. Once you've been through the '30s, where there wasn't much, this is nothing,” she said. “I was born into that, in ‘34 when it was just starting to get bad, and I just grew up with it and didn't know any different.”

As a child in the late '30s, Boivin remembers also having to stay inside a lot of the time — but during that time, it was because of the perennial drought that plagued the prairies, rather than the spreading coronavirus keeping people at home now.

“I could write my name in the dust on the windowsill, and it was like that every day,” said Boivin. “We'd eat dust, everything was dust, and it was everywhere.”

Boivin said that the dust was fine like sand, and it piled up along fencelines like snowdrifts and hung in the air. Her grandfather had a rope tied between the house and the barn to act as a guideline, because some days it was impossible to see even that far because of the dust.

The sky was gloomy during the Dirty Thirties, she said, not like the clear weather outside the windows of Moose Jaw lately.

The only time she stayed home from school was when the weather was poor, including days that were so dusty it was difficult to breathe, and she doesn’t remember school ever being cancelled.

Boivin is also staying put at home in the present, to follow the province’s social distancing orders and protect her health, but it has made her think about how her current quarantine allows a bit more freedom than the one in the '30s.

Two photos of the snowbank-like dirt after a dust storm in the early 1930s, taken by Boivin’s mother.

Because of the dirt in the air keeping people inside, and as many didn't have cars to take for a drive, that meant families in the '30s and '40s were facing a lot of the same conundrums as families in 2020.

For starters, running to the grocery store every other day wasn’t the norm even back then, and grocery deliveries weren’t a common practice — especially for rural households.

Boivin remembers her mother sometimes had to time her shopping trips to town with her neighbours’ trips, or take herself by horse and sleigh in the winter, which meant she shopped for groceries very efficiently.

The family supplied some of their own food, like milk from their cows and vegetables from the garden, but some things had to come from town.

Boivin also remembers there being limits on food availability — although not quite for the same reasons as the empty shelves in some grocery stores earlier this month.

Baking supplies, like sugar, were often hard to come by sometimes back then too, said Boivin. Plenty of people did their own baking at home, which many people began to do during the current pandemic.

During the war, grocery shopping was dictated by ration books, limiting families on items like meat to keep them in supply. Modern grocery stores took up a vaguely similar practice earlier this month, when they imposed item limits on things like toilet paper, flour, and disinfectants because shelves were swept clean.

"(When I saw that happening) I thought, you know the next thing we're going to get is ration books," laughed Boivin.

Boivin doesn’t recall there ever being a shortage of toilet paper during the Second World War, but she does remember that TP was a bit of a luxury, to begin with, and many families made do with substitutes like Eaton’s catalogue pages or Christmas orange papers in their outhouses.

People were quite diligent with their pantry when they cooked during the '30s and '40s, much like people now. Meals were rationed and prepared according to exactly how many people would be at the table, and having leftovers wasn’t a regular practice.

Children also had to entertain themselves without technology, especially when they were stuck inside during the too-dusty days in the '30s. Boivin finds it amusing to see so many families getting into the same tried-and-true activities she remembers filling her time with when she was younger.

Puzzles, card games, music, and handcrafts like knitting and crocheting are on the rise once again — and were all things Boivin did as a child and young adult to keep her busy.

“But we didn't do it by electricity, we did it by candlelight,” said Boivin. “But isn’t that funny, how it’s come back to doing things like that?”

Listening for news about the state of the world was also a bit different back then, but no less important. Rather than being able to check hundreds of news sites at the flick of a finger, Boivin said her father would turn on the radio just to hear the news update from the local station before shutting it off.

“And it was only the news, we didn't get sports and all that stuff,” said Boivin, before adding, “Well, we did get Superman, we were allowed 15 minutes of Superman and we caught it just after we got home from school.”

For more widespread news, Boivin remembers coming into Moose Jaw to the Capitol Theatre to see informational films about world events — like the concentration camps during the war, for example. 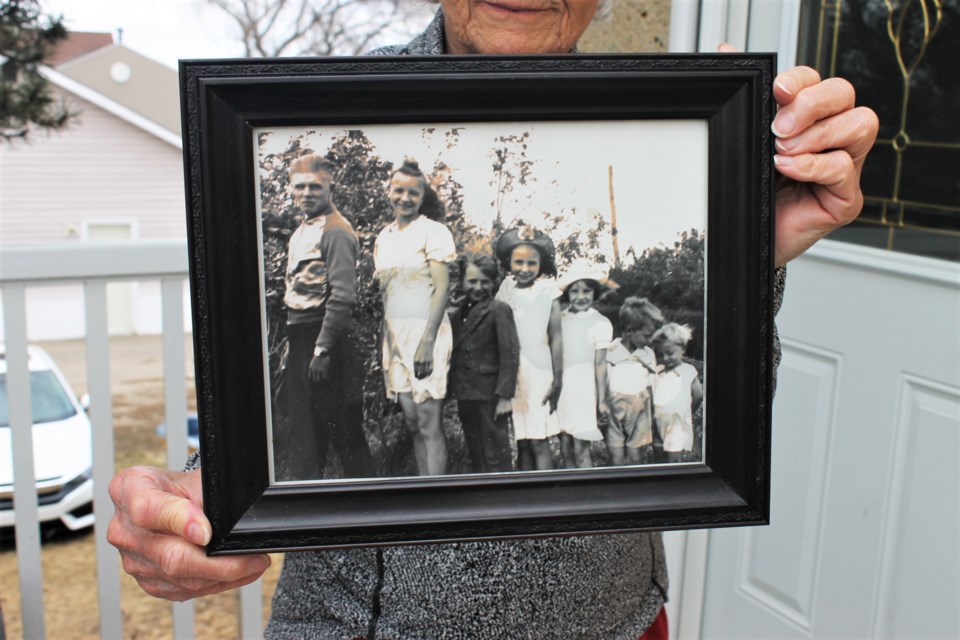 Gwen Boivin holds a framed photo of herself and her six siblings, who all grew up outside of Moose Jaw.

Unlike this pandemic, the rationing during the '30s and '40s didn't extend to the social setting. Boivin remembers community dances every Friday night to fundraise for the Red Cross, and neighbours still interacted normally.

It’s also apparent that people in rural Saskatchewan have always been a generous community, said Boivin, always willing to lend a hand or money to those in need.

As one of the millions of Canadians who took part in the Red Cross wartime knitting project during the '40s, Boivin remembers being sent a ball of yarn, which she would knit into a scarf or a blanket square to be sewn together and sent overseas to soldiers in the Second World War.

It was a home-based initiative that is greatly reminiscent of the people who have begun making handmade protective face masks for frontline health care workers during the pandemic right now.

Keeping in touch with friends and family who weren’t nearby was also much more complicated, said Boivin. Where she grew up, lots of households didn't have a phone yet and those who did only used it for important situations, like emergencies.

During the war, letters and telegrams were the main forms of communication — and they travelled much slower than today’s phone calls, text messages, and video chats.

For the most part, Boivin looks back on her history very fondly but it has reminded her that things were much tougher when she was a child compared to her isolation situation now.

“It's not like now, where everybody has what they need in their house, and (I think) that's the difference between then and now,” said Boivin.

Boivin remembers what it was like for the country following the war, and how difficult it was for many to return to regular work and life. Although things weren’t necessarily closed down like they are currently, it was still a tough adjustment for the economy.

Staying at home the last several weeks hasn’t been tough for Boivin, who remembers the isolation of the '30s and '40s as much tougher.

The advice that Boivin offers to people experiencing the social climate right now is fairly simple.

“Use it as a holiday,” she said. “Use it to relax and spend time with family, enjoy it, because when you finally get what you're wishing for, it's not going to be easy to bring everything back.”

Boivin also shared a saying that her father used to tell her and her siblings when the weather was poor and they were to stay inside — one that she felt is as pertinent today as it was when she was a child.

“When it was 50-below and he didn't want us walking to school, 'stay the heck home,' he'd say," said Boivin, adding that his age-old advice is just another version of a phrase she’s been hearing a lot recently as well.