“There'll be some good books that never see the light of day, probably, and that's a sad fact,” said author and Coteau Books co-founder Robert Currie
Mar 17, 2020 9:30 AM By: Larissa Kurz 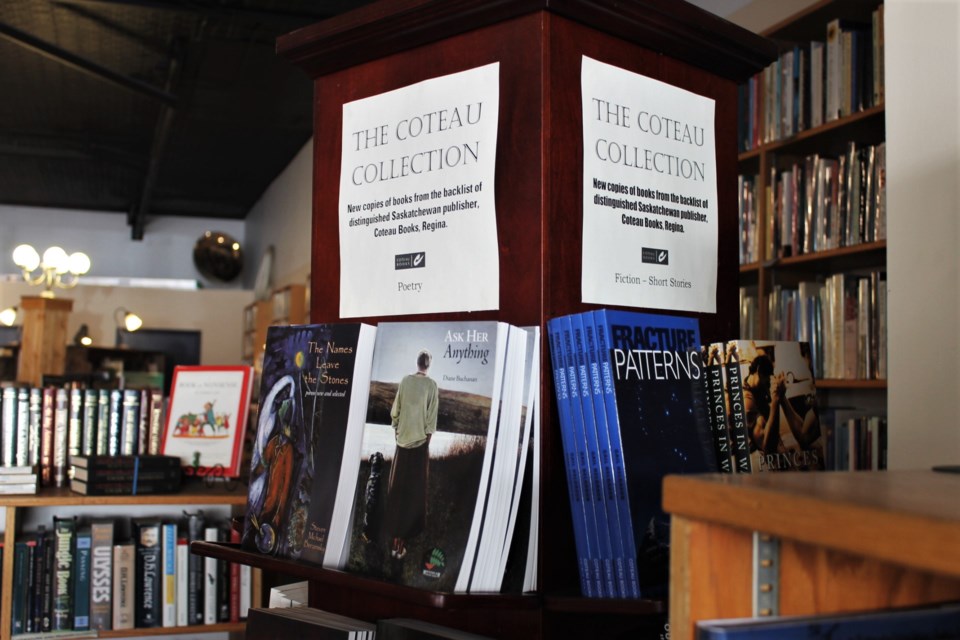 Coteau Books has its own display in Moose Jaw retailer Post Horizon Booksellers, which will eventually feature empty shelves as the publisher has ceased operations.

Despite the board of director’s best efforts, Regina-based publisher Coteau Books has declared bankruptcy and ceased operations entirely — a reality that founder, author, and board member Robert Currie says is “heartbreaking” to witness.

“It's really heartbreaking to see Coteau Books go down. It's a terrific loss for writers, not just in this province but across the prairies,” said Currie. “I can tell you that the people on the board fought really hard to try and find a way to keep it going, but we just couldn’t find the money.”

Currie, a Moose-Jaw based writer, originally helped found the company in 1975 alongside authors Barbara Sapergia, Geoffrey Ursell, and Gary Hyland.

The original idea was to make publishing opportunities available to Saskatchewan writers in an industry that was, at the time, not easily accessible to many in the prairies.

Coteau Books quickly expanded to include not only poetry but all genres of work and has been an important fixture in the prairie publishing scene for decades.

They have published hundreds of titles, many of which have collected awards and nominations, in a large range of categories — something that not many publishers can claim.

“A lot of writers got their start with Coteau and went on to big things,” said Currie.

Authors like Bonnie Burnard, who won the Commonwealth Best First Book Award and later on, the Giller Prize. Or Dianne Warren, who published her first titles with Coteau and went on to win the Governor General’s Award for fiction.

Coteau Books has also published many books that didn't’ win awards but were largely popular, such as Mary Harelkin Bishop’s famous novel Tunnels of Time, which has sold over 40,000 copies in its time.

“There have been a lot of success,” continued Currie. “And there just won’t be any more.”

To see the long-standing publishing company close its doors is going to be a huge loss to the literary community in Saskatchewan, said Currie.

He imagines it will be harder for first-time authors to have their work published in the future, which could, unfortunately, leave many Saskatchewan voices unheard.

“It's a sad thing for a lot of people and I've been hearing from a lot of people how disappointed they are that it's happened,” said Currie. “I just feel really sorry that it's gone and feel sorry for the writers that we won't be publishing now.”

Now that the company has entered into bankruptcy protection, Currie also expressed concern for those authors whose projects were currently in production, as they are not going to be completed.

There’s also a number of past titles that will no longer be printed and distributed, like Lois Simmie’s recent memoir, and while Currie hopes to see those titles taken on by another publishing company for the future, that remains up in the air.

Currie credited part of the publisher’s struggle to the decline of independent bookstores creating a tougher market for titles from smaller publishers like Coteau Books.

“It was often those small bookstores that recommended small press books and made a point of carrying them, and so many of them are gone now,” said Currie.

As one of the three larger publishing presses in Saskatchewan, the closure of Coteau Books is certainly going to leave a large hole in the industry for both writers and readers alike.

“There'll be some good books that never see the light of day, probably, and that's a sad fact,” said Currie. “And it's a sad thing for readers, that they won't get a chance to read those books.”