Both the parks department and the Wakamow Valley Authority recently discovered a pocket of 38 infected trees in a small area deep in the valley away from walkways
Jul 27, 2020 4:05 PM By: Jason G. Antonio 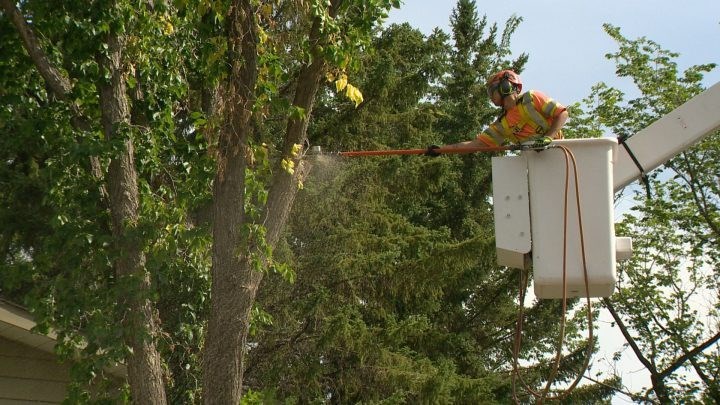 The parks department and Wakamow Valley Authority believe they have found the source of Dutch elm disease (DED) that has plagued the community — especially on South Hill — for several years.

Both groups recently discovered a pocket of 38 infected trees in a small area deep in the valley away from walkways, explained city horticulturalist Sarah Regent.

“It’s actually a very good thing that we were able to find that pocket, and we are getting things under control,” she said, adding a group of non-elm trees sheltered the infected ones. “Elms are coming out quite quickly, so we are staying on top of it.”

Meanwhile, Dutch elm disease has killed 20 trees in Moose Jaw so far. The parks department will continue to monitor the trees’ health until early September, but stop once the leaves begin to change colour as the seasons switch.

The department is not seeing a significant spike in DED anywhere in the city, while the number of infected trees in residential areas is as expected, said Regent.

“So we’re quite happy with our numbers, actually, given that it’s been really tough on the elm trees the last couple of years, with hard winters and drought conditions, which makes them more susceptible to the disease,” she continued, “so we were expecting to see a bit more of a spike than we’re seeing.”

In comparison, the department detected 31 diseased trees by last August, with the worst cases found on South Hill. The number of cases last year was double the number — 18 — found in 2018. Since there are about 18,000 elm trees in Moose Jaw, the numbers of infected trees represent less than one per cent of the entire elm tree population.

DED is a fungus that blocks water from travelling throughout the tree and to the branches. Symptoms include leaves on the affected branches wilting, curling up, turning yellow or brown, and drying out. These symptoms are usually accompanied by brown to black staining in the sapwood, also known as streaking.

Elm bark beetles are the primary carrier of the DED fungus and travel from infected trees — where they deposit their eggs — to healthy trees to feed, said Regent. By flying from tree to tree, these beetles effectively deliver spores of the fungus. The insects are also native to Saskatchewan and don’t damage the trees since both have evolved to co-exist.

While there are some economic losses to removing trees, another loss is the environmental value of the flora, she continued. Replacing a large elm tree with a new young tree can affect oxygen production, pollution absorption and storm water retention, all issues that a mature tree can handle easily.

The municipality has a program to replace trees on a one-to-one basis and plant a variety of them. The parks department will not plant new elm trees unless it’s in a particular area and under “exceptional situations” where they are far from other elm trees in safe locations.

Some trees that the parks department is planting are maples and lindens, along with smaller trees such as tree lilacs and ornamental lilacs. The department uses 12 species to ensure there are a variety of trees to plant in the future. This also ensures trees can survive should another disease arise.

Regent reminded residents that the ban on pruning elm trees is from April 1 to Aug. 31, while homeowners should watch for any sick-looking elm trees and report them to the parks department at 306-694-4400.