Big changes to affect society in next 15 years, says speaker 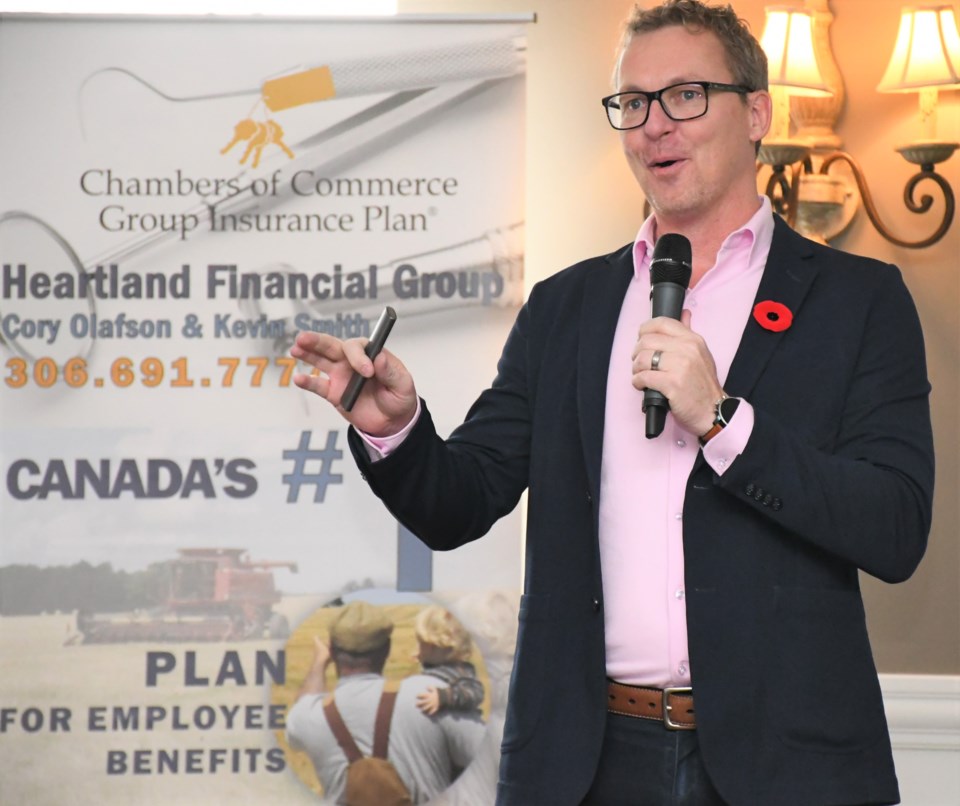 Motivational speaker Doug Griffiths talks about how societal and technological changes will transform communities in the next 15 years. Photo by Jason G. Antonio

Technology has changed so much over the years that such disruptions will happen more quickly in the future regardless of whether society is ready, says a motivational speaker.

There will be more changes in the next 15 years than there were in the last 100 years, explained Doug Griffiths. For example, the Wright Brothers’ first flight occurred in 1903, while it then took another 66 years for mankind to reach the moon. Furthermore, the first cellphone shown in a movie was in the 1987 flick Lethal Weapon, but since then, such technology has morphed from flip phones to iPhones with more power than the 1969 space mission.

Computers have also evolved since they first appeared in the 1940s, Griffiths told about 40 businesspeople during a chamber of commerce luncheon at Grant Hall on Nov. 5. The first computer was the size of a gym and could only add numbers. Computers eventually changed to desktop computers and then touchscreens.

“Individuals resist technology, but society accepts it quickly,” he said.

Human-driven vehicles as the main mode of transportation will also likely cease to exist in 15 years, Griffiths predicted.

Autonomous vehicles are becoming more advanced each year. In 10 years’ time, 35 per cent of all vehicles will be autonomous, while in 15 years’ time, that number will climb to 85 per cent.

“Technology creates problems and then technology solves problems,” he said. “You can’t undo it. It’s not going away.”

It will cost pennies per kilometre for an autonomous vehicle to operate, compared to a combustion-engine vehicle that costs $10,000 per year to maintain and sits around 95 per cent of the time, Griffiths continued

These autonomous vehicles will cause major disruptions to societies and governments, he said. If there are only autonomous vehicles, will there be a need for driveways and garages? Parking? Roads? Gas stations? Overpasses and freeways? Traffic lights and signs? Buses, subways and LRTs? Some communities in the next 15 years will say no to any vehicle that isn’t autonomous.

Business is also changing, he pointed out. Uber is the world’s biggest taxi company and owns no vehicles. Airbnb is the largest hotel service and owns no buildings. Other businesses that have caused disruptions include WeChat, Alibaba, Facebook, bitcoin, Netflix, and Apple.

Meanwhile, businesses that refused to change — and that died — include Blockbuster, RCA, Kodak, Sears, Xerox, Polaroid, and Myspace.

Autonomous doctors will soon be a mainstay in clinics, while education will also experience major disruptions, he continued. A student entering school today to be an engineer will be unqualified in four years since the technological change will have quadrupled.

Google is working on eye contacts that connect to your phone. This will eliminate the need to look at your phone when following a map; it will simply be projected through the contacts. Millennials and Generation Z kids will adopt it quickly.

Technology has also changed the economy and how businesses operate, Griffiths said. Online shopping is killing downtowns, but online businesses such as Amazon know they can’t compete with quality, selection, service, experience and atmosphere. Younger generations will be driven by these latter qualities than simply price.

Demographic changes mean there are more women in the workforce and more minorities. This will lead to more variety of opinions on boards, Griffiths said. Many seniors will retire in the next decade but will want to work part-time. Businesses should see these people as semi-retirees and not seniors since they are important economic drivers.

Businesses should also encourage young people to co-lead immediately, he continued. Senior leaders have experience, but they don’t know how to use new technology as easily as youths.

“The next generations … are not interested in titles. They don’t care, they don’t care,” Griffiths said. Instead, Millennials care about ideas, places where they can be creative, and good social spaces such as coffee shops and yoga studios. They also value organizations that help others, don’t compete against one another and support their families.

“Quality matters to them. They won’t sacrifice their entire lives for one company,” he continued.

Values changes also leads to societal changes. Young people want communities that are more open and personal than the subdivisions of today.

“Subdivisions are dead,” Griffiths said. “The next generations don’t want three-car garages and no place to walk and no place to recreate and no place to socialize. They want to live in neighbourhoods, not subdivisions. My recommendation is start with your downtown and make it a place where people live and socialize … .