'We’ve said that we believe that this is a logical solution to the power needs in this province ... . It's been an argument that's resonated,' says Mayor Fraser Tolmie
0
Nov 7, 2019 5:58 PM By: Jason G. Antonio 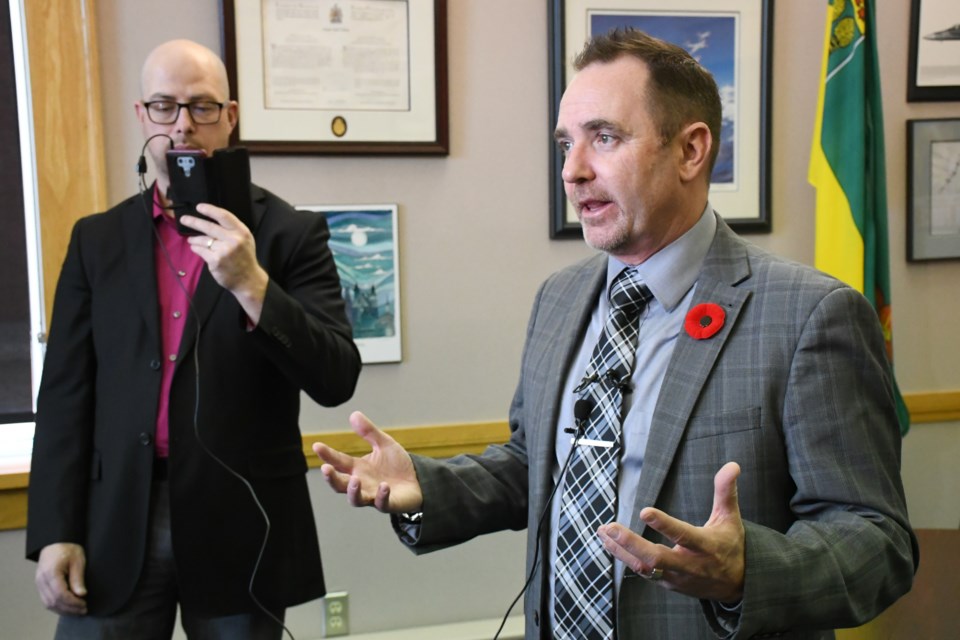 Mayor Fraser Tolmie speaks to the media in his office on Nov. 7 about the positive announcement that SaskPower will build its natural gas plant in Moose Jaw. Photo by Jason G. Antonio

SaskPower’s announcement that it was going ahead with its natural gas plant occurred due to teamwork and plenty of meetings behind the scenes to ensure the project proceeded, the mayor says.

The Crown corporation announced on Nov. 7 that it would proceed with its 350-megawatt natural gas power station in the Southeast Industrial Park. At peak construction, SaskPower estimates that more than 500 jobs will be created, while about 25 permanent jobs will be created once the plant is operational.

SaskPower wants to have the natural gas plant built by 2024.

Mayor Fraser Tolmie held a press conference at city hall later that afternoon to express his delight about the project going ahead.

“We’ve been very passionate about this project and worked to ensure it would be built in the City of Moose Jaw … ,” he said. “We’re very pleased with the announcement.”

There has been a team effort at city hall since June to ensure the project continued, Tolmie explained. City administration has worked with SaskPower to complete the servicing agreement and has demonstrated that the community is behind the new gas plant.

Tolmie, meanwhile, has spoken several times with Premier Scott Moe and Environment Minister Dustin Duncan about wanting to see the plant built, along with anyone who will listen about the importance of this project. Community MLAs Greg Lawrence and Warren Michelson have also contributed behind the scenes by speaking with Sask. Party cabinet members.

“It’s fairly regularly that I’m in Regina at the (Legislature). I’ve received a few text messages from some of the ministers saying, ‘You’ve been heard and congratulations,’” Tolmie said.

Tolmie heard that the project was going ahead when Environment Minister Duncan texted him the night before the announcement.

Most of city council was positive about the status of the project, Tolmie said, adding it’s important to focus on those positives.

“We’ve said that we believe that this is a logical solution to the power needs in this province,” he continued. “That’s why we said we need to grandfather this project when we were talking with the federal government and our conversations with the premier … . It’s been an argument that’s resonated.”

The province is investing $700 million into the construction of the natural gas plant, the mayor pointed out. The investment will benefit not only Moose Jaw, but also the province overall since the plant will contribute to the power grid, help provide baseload energy and contribute to upgrading aging infrastructure.

“I’ve been saying this from Day 1, that we need to maintain our power independence for this province due to some of the changes and challenges put forward from the federal government concerning carbon tax and emissions … ,” he said.

“I’d hate to see our hard-earned money going to another province because we needed to purchase power from them. I’m very pleased the money is going to stay in Saskatchewan.

This past June, the federal government announced new regulations that affected the gas plant. Based on the new federal regulations, to be exempt from the carbon tax, any natural gas plants coming online after 2021 needed to have zero emissions.

With federal approval given, SaskPower is now undertaking a process for the pre-qualification of proposals to build the plant. SaskPower will next submit a technical proposal for provincial environmental review, execute land and service agreements, and proceed with shortlisting qualified proponents to design and build the gas plant.