Students from the Riverview/Cornerstone boys’ basketball team dropped off letters expressing their disappointment the season is coming to an abrupt end
Mar 11, 2020 9:00 AM By: Jason G. Antonio 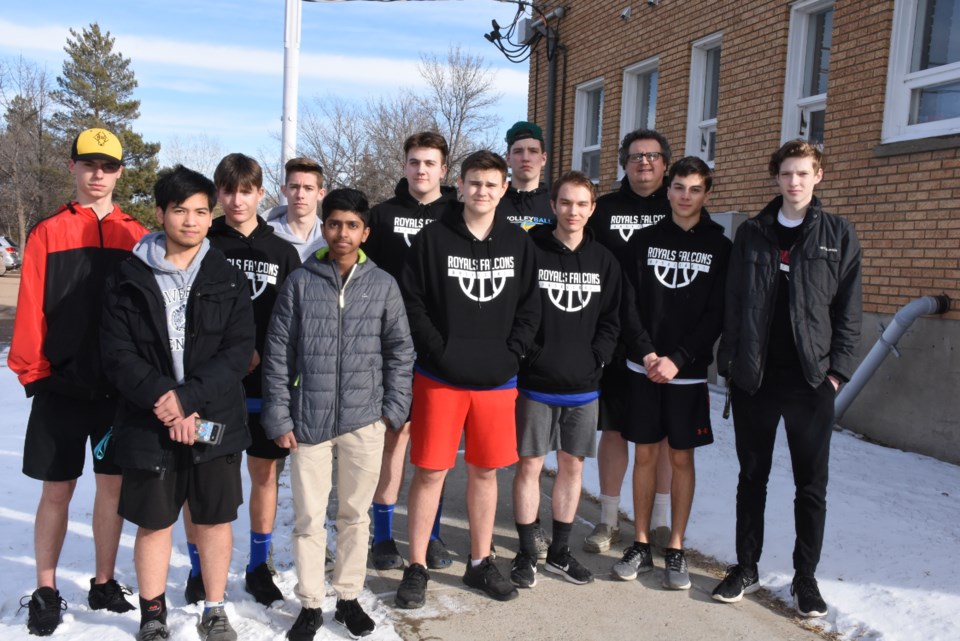 Members of the Riverview/Cornerstone boys’ basketball team gather outside the Prairie South School Division office after delivering personal letters that expressed their disappointment about their playoffs being cancelled due to teachers’ job action. Photo by Jason G. Antonio

The Riverview/Cornerstone boys’ basketball team was excited to compete at regionals for the first time in eight years, but that will likely not happen because of teachers’ job action.

The Saskatchewan Teachers’ Federation announced recently that restrictions on the services educators provide would go into effect at 3:30 p.m. on Thursday, March 12. The STF explained that teachers would not provide any extracurricular or voluntary services until further notice. Teachers would be at school 15 minutes before school starts and 15 minutes after the final bell, but no earlier or later.

The job sanctions come when high schools’ extracurricular activities are occurring, including basketball teams competing in playoffs. Regionals are scheduled for this weekend on March 13 and 14, while the provincial basketball championship Hoopla is set for March 19 to 21 in Regina. However, if no resolution is reached between the teachers’ union and provincial government, those tournaments will be cancelled.

This has crushed the joint Riverview/Cornerstone boys’ basketball team. Of the 13 players on the team, nine are in Grade 12. Many of them have played with the team for the past three years, including Cornerstone’s Javan Atkins.

“I’m pretty proud of the team. I was excited to see what we could do,” he said on March 10 outside the Prairie South School Division board office.

The players dropped off letters they had written about their journeys and how sports had helped them grow not only as athletes but as human beings. They explained how their coach had taught them to be better men and how to set goals. Moreover, they expressed their disappointment with the cancellation of regionals and Hoopla.

Besides the school board office, the players also dropped off letters at the office of Moose Jaw Wakamow MLA Greg Lawrence on South Hill.

Qualifying for regionals was a big step forward in the team’s growth since during the past three years it would usually be eliminated during conference playoffs, Atkins said. They went from losing games by 100 points to having a chance to make Hoopla.

“I support the teachers because they’re giving us our education, but I feel I want it resolved as fast as possible,” he added. “I’m upset we’re not going to be able to go.”

While all 13 players have given much to the team, the nine Grade 12s have “put in a boatload of time” during the past three years, said coach Curt Lorge. Having the players write letters ensures their voice is heard since they are stuck in the middle of this dispute. If nothing is resolved by March 12, it’s all over.

“That would be super disappointing for these young men … ,” he said. “I believe our government should do better by our teachers. I’m torn because I understand the politics of it; I just hate seeing kids used as leverage.”

Lorge was saddened the players won’t be able to chase a championship to the end, especially since they have put in hundreds of hours practising. He pointed out that it’s amazing how much the team has grown in the past three years.

“I mean, why couldn’t the job action have been last year or next year?” he laughed.

It’s difficult to explain to the players why this is happening, Lorge added. They don’t have that bigger view when they are young, so he has attempted to help them see why this job action is necessary for teachers.

Life’s difficulties couldn’t stop CFLer LaRose from succeeding
Nov 30, 2020 10:00 AM
Comments
We welcome your feedback and encourage you to share your thoughts. We ask that you be respectful of others and their points of view, refrain from personal attacks and stay on topic. To learn about our commenting policies and how we moderate, please read our Community Guidelines.