Saskatchewan members of the National Farmers Union met for an annual convention on March 31
Apr 5, 2021 3:00 PM By: Larissa Kurz 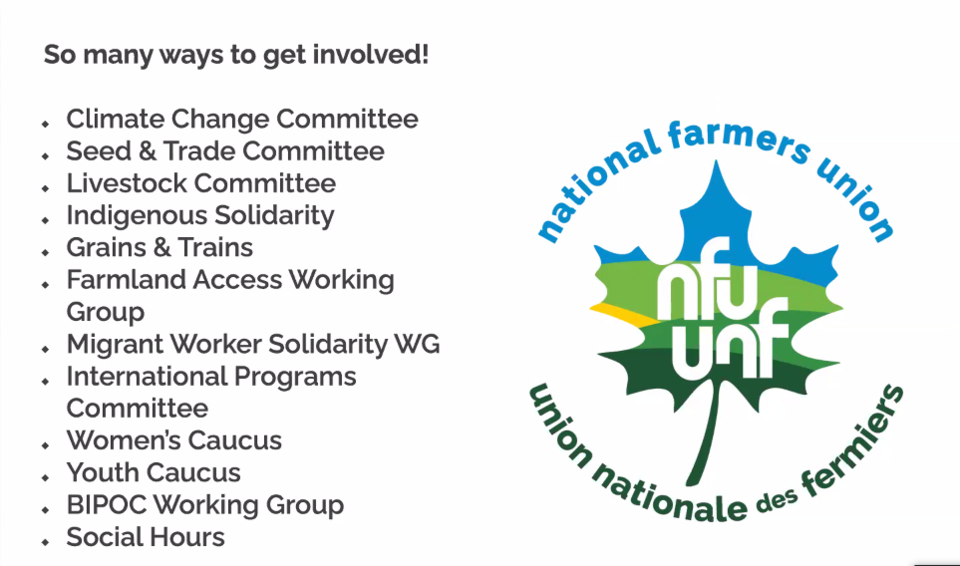 The National Farmers Union outlined the many ways members can get involved in its initiatives during the annual Region 6 conference on March 31. (screenshot)

The annual regional convention of the National Farmers Union (NFU) welcomed Saskatchewan members to a virtual conference on March 31, where they discussed the organization’s 2020 accomplishments and the forward-leading focus for 2021.

Region 6 board member Dixie Green led the proceedings, inviting several members to present on behalf of the NFU’s various committees.

Highlights from 2020 include a successful campaign to increase membership, the creation of monthly women’s meetings for members held via Zoom, and the launch of a working group for biracial, Indigenous and people of colour within the membership.

Ward also said that NFU representatives have been in roundtable discussions with provincial and federal officials about the COVID-19 pandemic response, regarding meat-processing shutdowns and changes to emergency funding support for producers.

Agricultural policies also in the NFU’s sights in 2021 include discussions on the regulation of gene-edited seeds in Canada, reviewing provincial livestock policies in relation to the climate committee and livestock slaughter industry, and further focus on anti-racism work and climate-friendly agriculture.

The NFU also plans to continue with its push for reform in the Agristability program to better suit small- and medium-sized farms, as well as a petition for a universal basic income.

Members voted their approval to push forward with three focused initiatives addressing agricultural and ecological concerns in the region this year, including creating an NFU-managed sustainable land tenure option to launch in 2022.

NFU members approved the organization’s plan to call on provincial and federal governments to suspend development funding for small modular nuclear reactors as well as call on Canadian health officials for the development and production of a hantavirus vaccine.