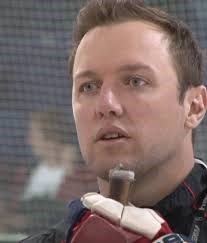 Trevor Weisgerber is currently home recovering from a kidney transplant last month. EpicHockey photo
Coaching a team that has had its fair share of impressive comebacks this season, Moose Jaw AAA Warriors head coach Trevor Weisgerber is aiming to make one of his own in coming weeks.

Weisgerber, 40, underwent a kidney transplant at St. Paul’s Hospital in Saskatoon a little over two weeks ago and has since returned home and is recovering.

Weisgerber’s story was covered in great detail in an outstanding article by former Regina Leader-Post sports editor Gregg Drinnan through his popular blog ‘Taking Note’, and things have only improved in the days since.

“Every day seems to be getting a little bit better here, and as far as feeling well, I feel good,” Weisgerber told MooseJawToday.com. “It’s night and day compared to the last couple of years, I feel better in the 17 or 18 days here since then. It’s going to take a bit for this to heal, so it’s slow going that way, but the energy I have, I feel like I have a lot more life in me and a lot more normal. It’s pretty good, for sure.”

Weisgerber has suffered with kidney disease for much of the past 11 years, with the issue leaving him drained at the end of the day and needing to hook up to a blood-cleaning machine every night just in order to function.

He got the call on Jan. 25 while working a hockey tournament for his daughter, London, 7. He and wife Laurren also have a son, Ty, 4, and it was a day later they were in Saskatoon and Weisgerber was undergoing the transplant.

He’s recovered quickly since then, and was released from the hospital only 10 days after the surgery.

“They say it’s a good two weeks or longer, but they said I was ahead of schedule and I was moving around pretty well so I could go home early, which was nice because I wasn’t sleeping very well in there,” Weisgerber said. “At least at home I can get a little bit more sleep and it’s helping for sure… the first five or six days, when you can’t move around a lot, it’s not a lot of fun.”

Throughout his recovery, Weisgerber had kept in touch with the team, which finds itself suddenly having lost three of their last four after a 5-3 loss to Notre Dame in Wilcox on Wednesday (see related story).

“I’ve been talking to the guys pretty much every day. We go over things and all that and it’s pretty good,” he said. “We’re just in a little funk here, we keep giving up third period leads so we have to squash this here before the playoffs. We’ve gotta figure it out quick, we only have three games left here and then it starts for real.”

Given how fast he’s recovering, Weisgerber is hoping to back in time for at least part of the first round of the playoffs.

“I won’t be able to ride the bus to Battleford, so I’m planning to take that weekend off and I’m hoping the following week I can get back at ‘er and I’m able to get back on the ice for practices, be on the bench,” he said. “As long the next week goes well, I’m hoping that’s going to be the plan.”

The AAA Warriors are back in action Friday when they travel to Swift Current to face the Legionnaires.