'For the community, there’s a real big injection of energy and dollars while the plant’s being built. But you’re always left with opportunities in the long run … . That to me is pretty exciting,' said SaskPower's Grant Ring
0
Feb 13, 2020 4:00 PM By: Jason G. Antonio 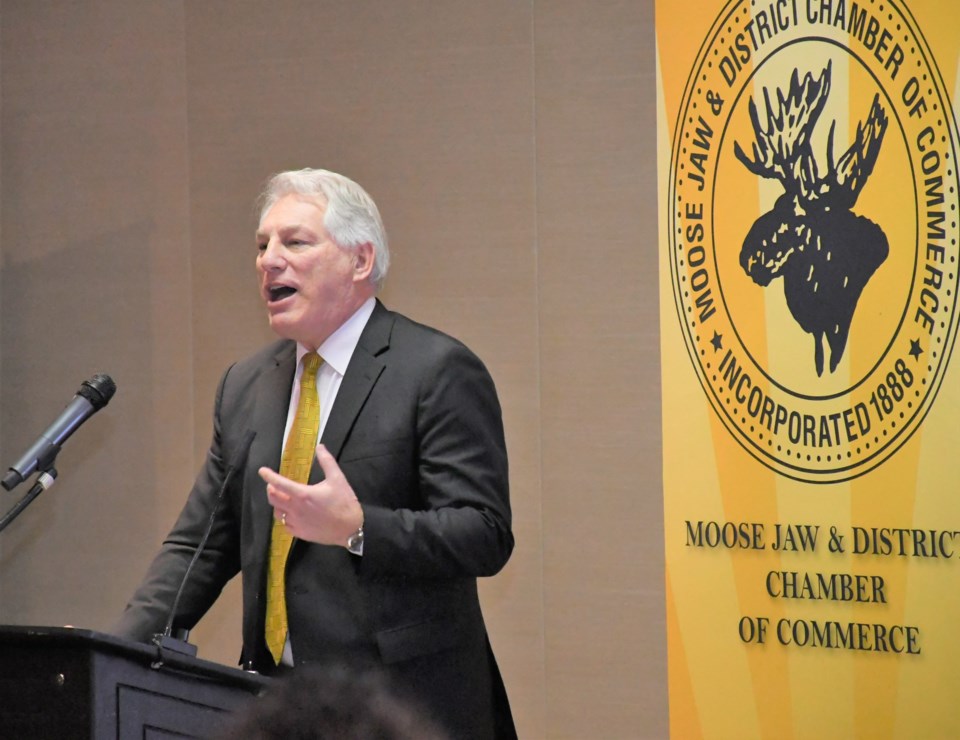 Moose Jaw should expect to see a “blizzard of employees” descend on the community when construction of SaskPower’s natural gas plant begins, says a company executive.

At least 500 people are expected to help with construction at various times during the three-year build phase and be responsible to help install — among other things — nearly $140 million worth of materials created in Saskatchewan, explained Grant Ring, vice-president (supply chain) for SaskPower.

This influx means SaskPower will have to communicate regularly with the community due to the expected increase in traffic. Sometimes the Crown corporation doesn’t always explain its reasons well, but it is working to better address that concern, Ring told more than 200 business leaders at the Heritage Inn on Feb. 12 during a Moose Jaw & District Chamber of Commerce luncheon.

His talk focused on the new plant — to begin construction in late 2021 and open in 2024 — and the opportunities the community can expect to experience.

The number of employees working on the plant will decrease when the building is finished. While 20 to 25 people will work there full-time, the building’s core needs — food, security, maintenance, cleaning — will need to be met for the next 25 years. This could lead to the creation of another 35 positions.

“For the community, there’s a real big injection of energy and dollars while the plant’s being built. But you’re always left with opportunities in the long run … ,” he added. “That to me is pretty exciting.”

SaskPower is building a natural gas plant since it provides “a tremendous opportunity” to reduce the company’s greenhouse gas emissions, Ring said. Such a plant will produce half the emissions compared to a coal-fired plant while also helping to meet the demand for energy.

The plant will produce enough electricity to provide more power than either Regina or Saskatoon could ever use, Ring said to applause. SaskPower is now figuring out whether it wants the plant to run continuously or only when the power fluctuates.

The demand for electricity is growing, Ring continued. While he was enthusiastic about the increase in new businesses and mines in Saskatchewan, he noted if even half those businesses came online, SaskPower would have difficulty building enough power plants to keep up with electricity demand.

Therefore, the Crown corporation needs to ensure it has enough baseload power to meet the needs of more than 1.2 million residents. This also includes the electricity needs of power-hungry mining operations.

SaskPower is adding more wind and solar power generation, while it is looking to use batteries to store that excess power. However, back-up sources of power are needed to keep supply steady for customers, especially when wind generation produces only one per cent of electricity in the winter, Ring said. Moreover, while wind and solar can work, neither can meet the full needs of mining operations.

Natural gas is economical, affordable and environmentally friendly, while SaskPower is now the largest user of natural gas in the province, he continued.

“It burns pretty clean … it’s a great source for us,” he stated, adding in 10 years the company could look into nuclear plants to help produce electricity.

Ring pointed to two projects to show how little of an environmental effect natural gas plants have. The 260-megawatt North Battleford Energy Centre opened in 2013 and, while it produces carbon dioxide, that gas comes out as water vapour. The 353-megawatt Chinook Power Station began operations last December. It’s a “nice, clean setup” that can generate power for more than 350,000 homes.

Everything about the forthcoming natural gas plant should look sharp, from the way the site is maintained, to the neatness of the cleanup, to the professionalism of the project proponent, Ring added. He expects the Moose Jaw project to be successful for SaskPower.