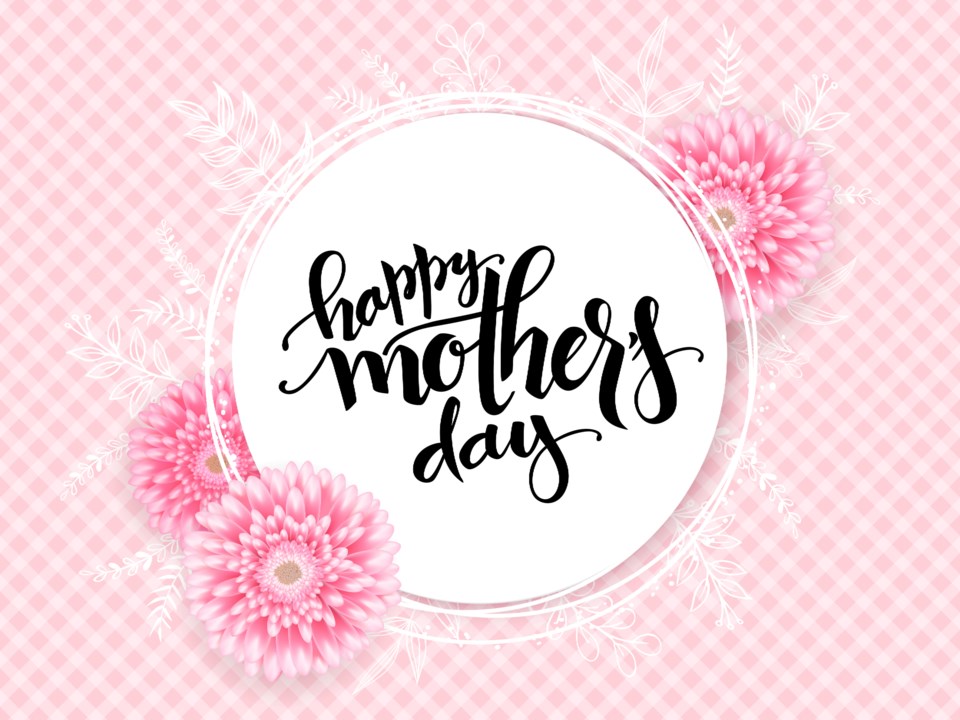 Sunday is Mother’s Day. It is the perfect time for us all to honour the moms in our lives. Whether you call, text, or visit, be sure to let mom know you care.
This week, we look at everything related to Mother’s Day and moms.

Mother’s Day, as it is known in North America, can trace its roots to Ann Reeves Jarvis. She organized “Mother’s Friendship Day” in 1868 as a means of helping families who had become divided by the U.S. Civil War. Abolitionist and suffragette Julia Ward Howe also wanted to recognize mothers; in 1870 she wrote the “Mother’s Day Proclamation,” which was an attempt to promote world peace. By 1873 she campaigned for Mother’s Peace Day to be celebrated every June 2.

Jarvis’ daughter, Anna Jarvis, is responsible for the modern holiday. In 1908 Jarvis gain financial support from a Philadelphia department store owner, which allowed her to organize the first Mother’s Day celebration at a Methodist church in Grafton, West Virginia. She continued to campaign for the day to become a national observance and, over time, the celebration began to spread. By 1914, Congress passed a law designating the second Sunday in May as Mother’s Day.

Surprisingly (or perhaps not), Jarvis soon found that she despised Mother’s Day, as she felt it was too commercial.

There are approximately 10 million moms in Canada.

Statistics Canada reports that the average age of first-time mothers in Canada is 29.2.

Did you know? Most dads think their kids put more effort into Mother’s Day than Father’s Day. They might be onto something; in the U.S., consumers spend about $196 on Mother’s Day, compared to just $133 on Father’s Day.

Most people will purchase greeting cards or flowers, although chocolate, gift cards, and spa days are also quite popular. Americans will spend about $4.2 billion on jewellery, $2.4 billion on flowers, and $2.2. billion on gift cards. Be wary of jewellery; about one in three gifts mom receives will be fake.

But what does mom want more than anything? In one survey, 63 per cent of moms said all they wanted is to spend time with family. In another survey, only four per cent said that receiving gifts is what they looked forward to most.

The worst gift you can get your mom? A gym membership. Ninety-four per cent of women surveyed identified gym memberships as undesirable.

It’s not surprising, but call volume drastically increases on Mother’s Day. In 2018, SaskTel predicted users would send 10.2 million text messages on Mother’s Day alone (SaskTel did not provide insight on the anticipated volume of text messages for 2019). On Sunday, the company expects customers to make around 800,000 phone calls and receive 554,000 wireless and landline calls, while using over 116,000 GB of data.

Of course, these days many of us turn to social media to recognize our moms. In 2017, Mother’s Day generated more posts in a single day than any other topic on Facebook that year. In the U.S. alone, there were 65 million Mother’s Day-related posts.

Mother’s Day is a big day for the restaurant industry; it the second-busiest day for dining out in Canada and the busiest day overall for brunch reservations. The average reservation size is four people.

Because Mother’s Day falls on a Sunday, many people opt to go to church. In the United States, it is the third most popular holiday to attend church, behind just Christmas and Easter.

Despite all this activity, about 20 per cent of Canadians won’t celebrate Mother’s Day at all.

The most prolific mother of all time is Russia’s Valentina Vassilyev. Between 1725 and 1765 she gave birth to 69 children, including 16 pairs of identical twins, 10 sets of triplets, and four sets of quadruplets. Only two children died in infancy; the rest all lived well into adulthood. If any mom ever needed a spa day, it’s Valentina.

The longest interval between twins being born is 87 days. The record is held by Maria Jones-Elliot of Ireland. Daughter Amy Ann was born prematurely on June 1, 2012. Her other daughter, Kate, was born August 27. That’s a lot of waiting!

The oldest woman to become a mother is Daljinder Kaur, 72, of India. She and her husband, Mohinder Singh Gill, 79, welcomed their son into the world in April 2016. The clinic who treated the couple have also helped a 66-year-old woman give birth.

Anna Bates (nee Swan) gave birth to the largest baby of all time. Bates, originally from Canada and who stood at 7’11, gave birth to a baby boy weighing 22 lbs and measuring 28 inches. Sadly, the baby died 11 hours later.

The woman with the record for the most births from one pregnancy belongs to Nadya Suleman, more commonly known as “Octomom.” In January of 2009 she gave birth to octuplets, and became the first woman to have all of the octuplets live past the first week. Incredibly, Suleman already had six children at the time of birth.

Community’s neonatal services to improve due to donation from curling foundation
Feb 18, 2020 12:00 PM

Sandra Schmirler Telethon rings in 20 years back at home in Saskatchewan
Feb 17, 2020 9:30 AM
Comments
We welcome your feedback and encourage you to share your thoughts on this story. We ask that you be respectful of others and their points of view, refrain from personal attacks and stay on topic. To learn about our commenting policies and how we moderate, please read our Community Guidelines.