Only essential business items will likely be added to future city council agendas since the coronavirus has disrupted municipal operations, including the work of city hall employees
Mar 25, 2020 10:00 AM By: Jason G. Antonio 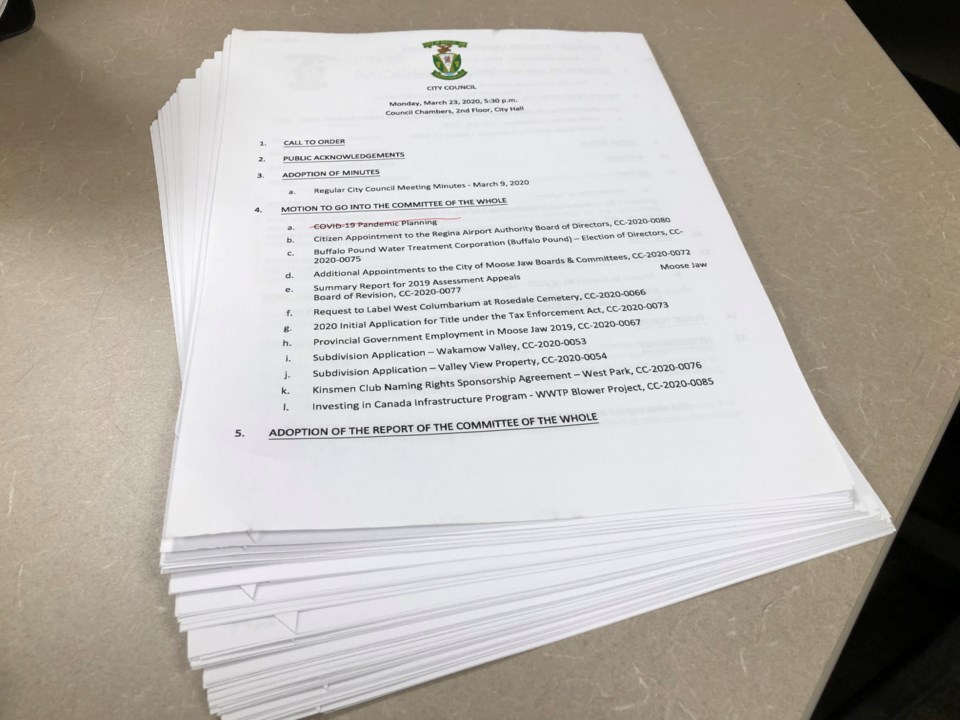 The council agenda for March 23 had 12 items under Committee of the Whole, which some councillors thought were unnecessary in light of the pandemic's negative effects. Photo by Jason G. Antonio

Only essential business items will likely be added to future city council agendas due to the coronavirus’ disruption of municipal operations, including the work of city hall employees

The provincial government has mandated that people remain two metres (six feet) away from each other to help prevent the spread of COVID-19, while people should also physically isolate themselves if sick.

Based on that, along with the order that no more than 25 people can meet in one place, city administration has ordered that any city hall staff who can work from home should do so. However, this means employees won’t have as much direct access to each other or all the resources to complete reports. This will probably lead to council dealing with fewer — but more important — issues for the foreseeable future.

Delivering those important day-to-day services that residents expect was one concern that councillors raised during the March 23 regular meeting. Providing access to the meetings was another concern.

To obey the order of physical distancing, councillors Heather Eby, Dawn Luhning and Chris Warren participated from home via online technology. Mayor Fraser Tolmie and councillors Brian Swanson, Crystal Froese and Scott McMann sat further away from each other at the council table.

There is an agenda item for April 13 — borrowing funds to establish a line of credit — that has been advertised, so city administration is obligated to present that issue, explained city manager Jim Puffalt.

While administration recommends holding that council meeting and presenting that item, the situation could change by then. Since administration has tested the online meeting process and has worked out most glitches, should the number of people in a location be reduced again, everyone would have to participate through technology, he added.

Under The Cities Act, all meetings that have been advertised are open to the public, but due to the pandemic and social distancing, city hall is closed and operations are taking place by phone and email, explained city clerk/solicitor Myron Gulka-Tiechko. However, if there are bylaws that affect residents’ property, they would have the right to address council.

“We’d ask people to self-declare that they haven’t had any COVID-19 symptoms and travelled outside the province. That is key to join the meeting,” he said.

The media would still be allowed to attend meetings or could watch online, Gulka-Tiechko stressed. However, beyond councillors and city administration, city hall is unable to expand the system to allow the media to attend virtually.

There are 12 items on the regular council agenda — some of which are minor — and one item on the executive committee agenda, Warren pointed out. He hoped city administration was focusing on the daily business that residents expected, while he wondered if preparing for council meetings would become an issue due to the pandemic.

This agenda package was prepared 10 days before March 23 and some of these reports were going to be presented when it was “business as usual,” replied Gulka-Tiechko. Since that has changed, administration intends to restrict future agenda items to only those that are critical.

“With that said, we need to maintain as normal as possible a schedule because we are anything but normal,” said Puffalt. “It is important that we maintain what we do. If anything needs to be addressed, we need to get it to council … .

“We should have a council meeting in three weeks. The world may have changed substantially by then but we don’t know. Working to deadlines is important.”

The next regular council meeting is set for Monday, April 13.

COVID Alert app now available to Saskatchewan residents for contact tracing
Sep 18, 2020 4:45 PM
Comments
We welcome your feedback and encourage you to share your thoughts. We ask that you be respectful of others and their points of view, refrain from personal attacks and stay on topic. To learn about our commenting policies and how we moderate, please read our Community Guidelines.